Once You Know The Path Broadly, You Will See It In All Things: The Freedom Riders and the 2020 Search for Equity

Happy Black History Month!  Hopefully your February is off to a great start, and you’ve had the opportunity to enjoy both the sunshine and snow. The month is off to a fast start here at SCY as we have a whirlwind of activity going on, including an upcoming Quarterly Meeting, continued development of your Substance Use Prevention Coaltion Youth Advisory Committee, and various other projects.

However, I am a firm believer in “work hard, play hard, so last night I had the pleasure of attending the final dress rehearsal of the Chicago Opera Theater’s latest production, Freedom Ride.

“Freedom Riders were groups of white and African American civil rights activists who participated in Freedom Rides, bus trips through the American South in 1961 to protest segregated bus terminals. Freedom Riders tried to use “whites-only” restrooms and lunch counters at bus stations in Alabama, South Carolina and other Southern states. The groups were confronted by arresting police officers—as well as horrific violence from white protestors—along their routes, but also drew international attention to their cause.” Source: History.com

“Summer, 1961. As racial tensions rise in New Orleans, a movement arises. The Congress of Racial Equality is looking for volunteers to ride buses and trains to Jackson, Mississippi, risking life and limb to end segregation. When Xavier University student Sylvie Davenport is handed a pamphlet and asked to climb aboard a Greyhound bus, she must choose between her academic future and joining the Freedom Riders.

Directed by acclaimed director and librettist Tazewell Thompson and conducted by Staley Music Director Lidiya Yankovskaya, Freedom Ride makes its world premiere in Chicago to highlight how far we’ve come, and how far we still have left to go.”

The production was absolutely beautiful.  It took an amazingly broad topic and created a beautiful snapshot of what that most tumultuous of times would have felt like. Featuring the amazing players of the Chicago Sinfonietta, the musical flavors of the presentation were delightful, encompassing jazz, blues, gospel, and even some barbershop.

I would totally encourage you to go and check out the production, which is perfect for this month particularly, but all 3 performances are already sold out! ☹

Someone said to me recently that “equity” is the new buzzword. The context of the comment implied that, like so many other concepts we can find in society, it’s being highly touted and preached and much less avidly practiced.

Equity is generally defined as the quality of being fair and impartial. Though some will use equity and equality interchangeably, they are very different concepts.

The difference between this is often illustrated with some variation of the following graphic. 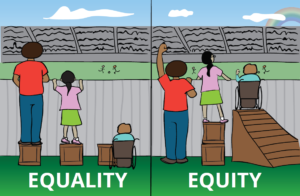 So much of the work that SCY and our partner organizations do is around the concept of equity, whether it be equitable community investment, or equitable education opportunities, or racial equity in a city that was built and designed on a platform of racial disparity and segregation.

We now know that equality isn’t enough because of the deep system disparities that many continue to face, giving everyone the same resources isn’t enough.  Equality doesn’t necessarily address the advantages and disadvantages that have been backed into our societal systems.

A SCY partner that focuses on this issue is Chicago United For Equity (CUE).  CUE works to connect and amplify the power of individuals to build a just, equitable, and inclusive city.

I encourage you to visit CUE’s website.  As we all observe Black History Month, and the meaning behind it, I feel it is important to spend some time in both thought and conversation about how we can all work to create a greater sense of equity in our society.  While we were informed a few days ago that “The state of our Union is stronger than ever before,”  that isn’t necessarily a sentiment that is reflected on every block in our city…and that is an issue.

What is a Firearm Restraining Order (FRO)?

Join the community of violence prevention partners. Sign up to receive our bi-monthly newsletter and/or SCY's policy updates.

Become a violence prevention partner today by supporting the work of SCY.